Chernivtsi is one of the most beautiful cities in Ukraine. It lies mainly on the right bank of the River Prut and is the political, economic, scientific, cultural, and administrative center of Bukovina in Ukrainian Carpathians. Nowadays, the territory of the city is 153 square kilometers, the population - more than 240 thousand people.

Chernivtsi has been known among travelers as one of the most interesting Ukrainian and Eastern European cities thanks to its history, natural attractions, wonderful architecture and generous soul of its inhabitants.

The ancient origins and the historical development of the city create the unique charm and atmosphere here, alluring and impressing people who are interested in Bukovina.

The first mention of the city is dated back to the 15th century. It was fixed in a commercial letter between the Moldavian Prince Alexandru cel Bun and the merchants from Lviv. At that time, the city and the neighborhood belonged to Moldavian principality.

The territory of Chernivtsi during more than 600-year of its existence was under to different states: Kievan Rus', Moldavia, Austria-Hungarian Empire, Poland, Romania and the Soviet Union. Only since 1941 the city belonged to Ukraine (since 1991 to the independent state of Ukraine). Every era shaped the city in its own way and left its trace in the modern city of Chernivtsi.

With the arrival of the Austrians began the active development of the cultural life of the city. In 1875 the Emperor Franz Joseph I founded the University with lectures in German language. Already in 1893 the University possessed a library with 50,000 books, a botanical garden, a chemical laboratory and the Museum of nature and history. At the University, there were the faculties of theology, law, political science and philosophy.

In the second part of the 19th century, the newspaper publishing houses were well developed. In 1848-1940 more than 370 different newspapers were published. Among them, there were 200 German, 68 Ukrainian, 50 Romanian, 28 Polish and 24 Jewish newspapers. In comparison to other European cities of this time, those were very remarkable figures.

The city also made a progress in the field of technologies. In 1897, half a year earlier than in Vienna, the electric tram was introduced in Chernivtsi.

The architecture of this historically significant city has been preserved up to our days and spreads a special elegance which attracts guests from all over the world.

The most remarkable in Chernivtsi is the architectural monument of the former Greco-Oriental archbishops’ residence, an imposing brick building on the "Bishops hill". Since the Soviet time, the building belongs to the University. In June 2011, the Archbishops’ residence building was included in the UNESCO list. Furthermore, the cupola of the Greek Orthodox Cathedral on Franz-Joseph-Square and the Opera House remain the unforgettable impression. 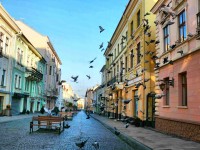 In 1904 construction of the new German Theatre started in Chernivtsi. There was a statue of Friedrich Schiller erected in front of the theater. Since 1940, the building was given for Ukrainian musical-dramatic theatre and named by Olga Kobylianska – famous Ukrainian writer. The theater is located at the former Elisabeth Square, which is now called the Theater Square. Olga Kotylanska theatre in Chernivtsi is almost identical with its design to the theater of Fürth city in Bavaria.

The world-famous composers Carl Mikuli, Emil Paur, Eusebius Mandyczewski, Ludwig Rottenberg, who made an important contribution to the development of the world music have come from this musical city. Chernivtsi, this pearl of Western Ukraine, is also linked with such worldwide known names as Paul Celan, Karl Emil French and many other prominent people not only in the field of literature.

The city with its inhabitants could preserve through the centuries its own atmosphere and identity. Every day at noon, locals and guests of the city can enjoy the beautiful melody of the Ukrainian song "Marichka" which sounds from the balcony of the city hall tower.

?,?serif?;??="" roman?;??="" de;??="">The German journalist Georg Heinzen once wrote about Chernivtsi: “It was a city where the Sunday began with Schubert and ended with the duel; the city where one could find more bookstores than coffee houses. This city located on the middle way between Vienna and Bucharest, Krakow and Odessa. It used to be an unofficial capital of Europe, where one sang the best coloratura soprano. Chernivtsi was a ship of pleasures with the Ukrainian crew, German officers and Jewish passengers on the board, which constantly headed between East and West under the Austrian flag.” (The newspaper “Rheinischen Merkur”, published on February 1, 1991).