Khotyn is a district center in the Chernivtsi region. It lies in the historical lands of the northern Bessarabia on the right bank of the Dniester river, 69 kilometers to north-east of Chernivtsi city. The town is surrounded by lush forests and rich variety of wild nature.

According to the census of 2001, the number of the inhabitants in Khotyn is 11.124 people.

Because of its strategic location Khotyn played a significant role in the history of Ukraine, Moldova, Poland, the Ottoman Empire, the Russian Empire, and Romania. In the 10th century, Khotyn belonged to the Kiev (Kyiv) Rus'. After Kiev Rus' division, Khotyn was a part of Galicia-Volynia principality and since 1373 was annexed by Principality of Moldova.

For the short period within 16th century, the city was under the Polish rule, then again under the Moldavian rule. In 1711 Khotyn came under the Ottoman Empire, Grand Vizier Mustafa Bayraktar was born there. 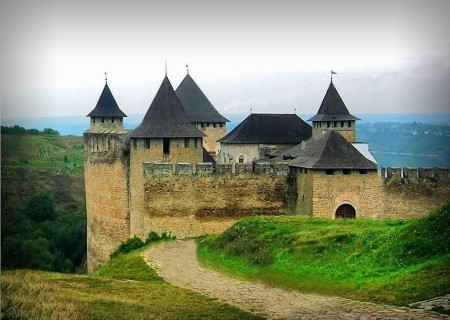 In 1769 Khotyn was conquered by the Russians, in 1788 it came under the Austrian rule, and in 1806 appeared again under Russian control. By Treaty of Bucharest signed between Russian and Ottoman Empires in 1812, Khotyn went under Russian Empire (Government Bessarabia) and was a part of it up until 1918.

After a short-term Austrian governance (8. March to 10. November 1918) the city, as a part of Bessarabia, was given to Romania. This caused in January 1919 the local uprising in Khotyn.

On June 28, 1940 Khotyn was occupied by the Soviets, however, shortly after the outbreak of the Russian campaign it came again under Romania (1941 - 1944). After the World War II ended, the city appeared as a part of the Ukrainian SSR, and since 1991 after Ukraine declared its independence, stayed as a part of Ukrainian territory.

Khotyn used to be an important Jewish center with approximately 19,000 Jewish inhabitants (when the total number of its population was about 35,000), There were 36 synagogues and famous Jewish schools.

Until the 20th century, there was a quite small community of Ukrainians in the city, at the same time a huge percentage of Russian-speaking citizens. The census made in 1930 showed the following results: 15% Ukrainians, 37% Russians, 38% Jews and 9% Romanians. Because of the Second World War and execution of a large number of Jewish population by German Nazis and Romanian military dictatorship of Ion Antonescu, the demographic situation significantly changed. Today, 72% of the population is Ukrainians, 16% - Russians, 8% - Jews (Hebrews) and 4% - Romanians.

The city of Khotyn is famous for its fortress, which Slaves built here as a protection of the water cross roads through the Dnister river. The fortress emerged in 13th century as the wooden construction and later was built in stone.

The modern fortification was built by the Moldavian prince Stefan III in the 16th century.

Until the 20th century, the city and the fortress remained as a strategical object and was the site of crucial and several battles. Polish king Wladyslaw IV Vasa in 1621 together with the Cossacks fought and won against the Turkish army here. Twice, in 1650 and then in 1652/53 the Cossacks under Timosch Khmelnytski leadership conquered the fortress.

John (Jan) III Sobieski, the King of Poland, after the break of Buchach Treaty was defeated in Khotyn on 11 November 1673 by united Turks, Moldavian and Cossacks troops.

During the Russian-Turkish wars in the 18th century, Khotyn became the battleground again: 1739 the Russians under the leadership of General Burkhard Christoph von Munnich won over the Turks. However, already in 1768, Turks took the revenge over the Russian troops under the walls of Khotyn fortress. Later on, the fortress was repeatedly the object of Russian conquests: in 1769 by Alexander Galitzyn, in 1788 by Ivan Saltykov, in 1807 by Ivan Michelson.

In the Soviet time, the fortress became the popular place for cinematography – more than 50 movies have been shot here.