Here are our Transcarpathia trips:

Transcarpathian region is located in western part of Ukraine. It borders with Lviv region to the north, Ivano-Frankivsk region to the east, with Romania to the south, Hungary to the southwest and Slovakia to the west. The area of the region reach for picturesque nature is 12,800 square kilometers. The biggest and the most important cities of Transcarpathian region are Uzhgorod, Mukachevo, Beregovo and Khust.

The region includes four mountains massifs Gorgany, Chornohora, Rakhivskyi and the Volcanic Carpathians. The highest mountain of the Ukrainian Carpathians is Hoverla (2061m) which belongs to the ridge of Chornohora. The longest river in the region is Tysa – the left tributary of the Danube River. Its length is 240 kilometers. Ukrainian Transcarpathia is rich for lakes (about 137 lakes), the largest and the most famous is Synevyr. It’s also important to mention that the geographical center of Europe is located in Transcarpathia village Dilove. The Transcarpathia region is also famous for its salt mines in Solotvyno, colored marble deposits, numerous mineral springs (360), which are used as sources of drinking and medicinal water for treatment of various diseases. Therefore the region is known for its health resorts – Berehove, Kvasy, Polyana and Shayan.

In the winter months, almost all cities in the Carpathians offer a reach variety of possibilities for sports and rests. There are numerous ski resorts, e.g. Dragobrat, Yasinia, Volovets. During the summer months it is also possible to experience Carpathians in an active ways: biking, hiking, horseback riding, rafting, off-road adventures...

Founded in 1968, the Carpathian Biosphere Reserve is a part of the nature reserve fund of Ukraine. Since 1992 it belongs to the network of UNESCO Biosphere Reserves. Synevyr and Uzhanskyi national parks also belong to the heritage of Transcarpathian region. 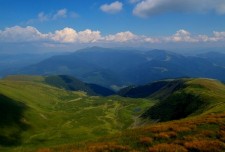 Since years Transcarpathia is characterized by ethnic diversity: Ukrainians as a major community, Hungarians, Russians, Romanians, Germans, Slovaks, Jews and Romas, in general there live over 30 nationalities. Even Ukrainians often belong to different Subethnic groups, e.g. Dolyniany, Hutsuls, Boykos and Lemkos. Therefore, the region is interesting because of its cultural diversity, traditional way of life, customs, habits and also dialects of local ethnicities. In different times the region was under the rule of different states. Up until the middle of 20th century, Transcarpathia was firstly a part of the Kingdom of Hungary, then the Habsburg monarchy and later on was annexed to Czechoslovakia.

On the territory of Transcarpathia there have been preserved 118 wooden churches, 48 of them, which have particular original and valuable carvings and paintings are placed under the state protection.  Also this region is known for its numerous castles, monasteries, and fortresses.