Mukachevo – is the connection point between the European Union and Eastern Europe – the largest bazaar province of Transcarpathian region. The city is the seat of the administrative center of Mukachevo district. Mukachevo is famous as the wine region, on the river Latoryzja. It is in the western part of Ukraine – 250 km southwest of Lemberg. The city is located near the border with Poland (200 km), Slovakia (90 km), Hungary (40 km) and Romania (110 km).

The most famous attraction in the town is the Palanok castle which was built in the 14th century. The population of the city is 77,300 people (according to the census of 2004).

The special feature of Mukachevo is its’ multinational and multicultural character: even now the city is a home for Ukrainians, Russians, Jews, Germans, Roma and Hungarians, who has their own culture and traditions and belong also to different religious denominations. As part of the Kingdom of Hungary, the city belonged to the Bereg County. The castle of Mukachevo (known as Palanok Castle), like most castles in this area, was built in the 13th century after the Mongolian invasion. Hungarian King Bela IV built the stone castle in Mukachevo to protect the eastern borders of the Hungarian Kingdom from further invasions of enemy’s.

In 1445 Mukacheve was declared a free royal town. The most famous owners of the castle were the Rákóczi family. After Hungarian rebellion against the Habsburgs headed by Ferenc II Rakoczi ended, the Rákóczi lost the castle.

The castle, the city and the surrounding area in 1726 were given by Habsburgs to the Austrian family Schönborn, who settled many Germans in Mukachevo. In that period the city expanded geographically and thrived economically. 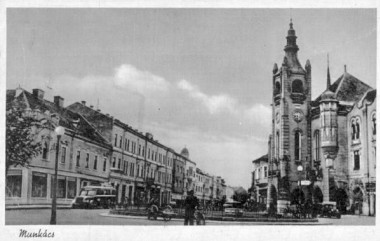 Since the end of the 18th century until 1897 the castle was used as a barracks and a prison. In 1919, the city became under the newly formed Czechoslovakia and now carries the name Mukačevo. Until 1944, there was a high percentage of Jewish population in Mukachevo.

After the invasion of the German Wehrmacht in March 1944, the entire Jewish population of the city was deported to Auschwitz. In July more than 80% of Jews from Mukachevo were killed in Auschwitz.

During the East Carpathian operation conducted by Red Army, the city was conquered on October 26, 1944. After the end of WW2, the town came under the Soviet Union when the Carpathian Ukraine was annexed to the Ukrainian Soviet Socialist Republic. Nowadays Mukacheve is a part of independent Ukraine.

The city is a hub between the EU and Eastern Europe. Mukacheve is a location of beer, wine, tobacco, textiles, furniture and food production. Interesting is the open air market (bazaar) in the city center, which has become now the largest bazaar in the Transcarpathian province. One can find a wide range of jambalaya on Mukachevo bazar.

Among the most important attractions of the city – Palanok Castle in Mukachevo, Mukachevo City Hall and, of course, the Rákóczi Palace, also known as the "White House".