Rakhiv is the gate into the Carpathians.

The town lies in the far eastern part of the Transcarpathian region on the side of the river Tysa near the border with Romania. It is the center of the Rakhiv district. According to the 2004 census, counts about 15,000 inhabitants. The town is hidden among beautiful mountains and green Carpathian forests. The highest mountain in Rakhiv region and in the whole Ukraine, Hoverla (2061m) is only about 30 kilometers away from Rakhiv town. Rakhiv is also the administrative center of the Carpathian biosphere reserve which includes the world's largest beech-forest areas (UNESCO heritage since 2007).

In 1885 – 1887 when the region was a part of K. and K. monarchy, the survey regarding construction of the railway line from Sighetu Marmatiei (Romania) to Ivano-Frankivsk (through Rakhiv) was conducted. In frames of the construction works the engineers have defined the geographical center of Europe which is in the village Dilove – only 20 kilometers south of Rakhiv. After Vienna Scientists review, the information about  the geographical center of Europe was confirmed. In 1887 the concrete geodesic monument of two meters high was built in Dilove. It is preserved in its original shape until now. 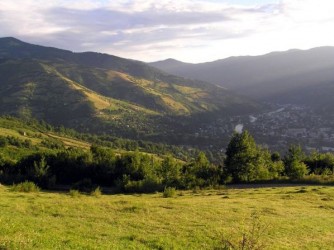 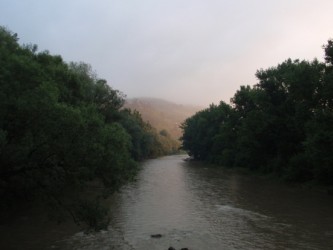 The first mention about Rakhiv is dated by 1447 as a village within the Kingdom of Hungary that was originally inhabited by Hutsuls from Galicia. From 1800 to 1820 due to the invitation of Hungarian authorities the German lumberjacks from present-day Slovakia territories settled the north part of Rakhiv. Since most of the settlers came from Slovakian town Spish (Spiš), they called their settlement in Rakhiv Cipery.

Since 1867, the city belonged to Austria-Hungary Empire. After the First World War defeat, Rakhiv joined the Hungarian Soviet Republic, then was shortly occupied by Romania and then, as the rest of Transcarpathian region, affiliated to the newly emerged republic of Czechoslovakia.

During this time, the mountainous region of Rakhiv experienced a tourist heyday period. That place due to its popularity back then was named in jest as the "Hutsuls Paris".

This phase ended when Hungary, as the result of the First Vienna Award in 1938, annexed south-western parts of Transkarpatiens and later, during the Slovakian-Hungarian War in 1939, annexed the rest of the region. Throurh the advancing of Red Army troops in the western direction, in 1944 the Red Army conquered the region. Since 1945 the whole Transcarpathian region became a part of the Ukrainian Soviet Socialist Republic. Since 1991 Rakhiv is the regional center in frames of state boarders of the independent Ukraine.

The town of Rakhiv is known as the gate to the Carpathians. Nearby there is the winter sport area called Drahobrat. This is the highest ski resort in Ukraine, which is the starting point for many beautiful hiking trails in the Carpathian Mountains during the summer.

Each year an unusual and very important Festival of Hutsul sheeps’ cheese takes place in Rakhiv. The program of the festival offers to the guests an unforgettable experience through the acquaintance with Hutsulshchyna – one of the brightest ethnical regions of Western Ukraine. As a part of the festival attractions, the guests can taste the famous sheep cheese "Brynza" and enjoy Ukrainian national cuisine.

The colorful program of the festival offers various musical events that acquaint the guests with the Ukrainian ethnic melodies. Also the vivid program of the festival offers different musical events for guests to get to know Ukrainian ethnic melodies. It brings out the true traditions of Carpathian shepherds trade, their way of life, their culture and hospitality.