Here you will find the trip offers which starts in Thanscarpathians. Uzhgorod is the capital city of the Transcarpathian region.  The city lies on the bank of the River Uzh, which gave the name to the city. Uzhgorod is located in the border triangle between Hungary, Slovakia and Ukraine, directly on the Slovakian border. Uzhgorod has 12 tween cities in many countries of the world, particularly in Hungary, the USA, Russia, Czech Republic, Germany, Denmark, Poland, Finland, Slovakia and Croatia.

The city is the residence of the Greek-Catholic Diocese (head of the Ruthenian Church).

Since many years, there live different ethnic communities in Uzhgorod. According to the census of 2011, the proportion of various ethnic groups is presented in Uzhgorod as follows: 77.8% Ukrainians, 9.6% Russians, 6.9% Hungarians, 2.5% Slovaks and 1.5% Gypsies. The total population of the city is 117,300 inhabitants. 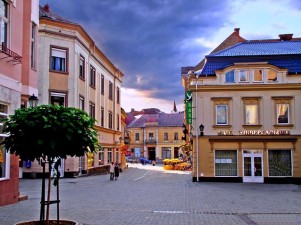 In the whirlwind of last centuries events Uzhgorod and Transcarpathians were belonging to numerous dominions, thus, local population experienced lots of boundary changes.

The first settlements in the present area of Uzhgorod according to the archaeological researchers belong to the early Paleolithic period (100,000 BC). There are also the Bronze and Iron Age settlements evidences among archaeological finds in this region.

After the Great Human Migration the tribes of Slavs settled here. According to the archaeological finds, the fortress of Uzhgorod emerged on the edge of the 8th and 9th centuries and became then an important fortress of Great Moravia. Written sources testify the existence of the fortress already in 903 (more controversial is the mention of the year 872). In the 10th and 11th centuries Uzhhorod was the southwestern outpost of Kievan Rus.

In the middle of the 11th century Uzhgorod, was conquered by Hungary. The conquest of the rest of Transcarpathian region was completed until the 13th century.

Until 1918 – 1919 the city belonged to the Kingdom of Hungary under different princes, thus, from 1526 also to the Austrian Empire (from 1867 to Austrian-Hungarian Empire). Within Hungary, the city was called Ungvár and was the capital city of the county Ung (Uzh).

By the First Vienna Resolution on November 2, 1938 Uzhgorod together with the whole southern part of the Carpathian Ukraine was given back to Hungary.

Towards the end of World War II, on October 27, 1944, during the East Carpathian operation, Uzhgorod was occupied by the Red Army. In June 1945, the city from Czechoslovakian control came under the Soviets and in 1946 became the center of the newly founded Transcarpathian region within the Ukrainian Soviet Republic of the USSR. Since August 1991 this region is a part of independent Ukraine.

Uzhhorod has the longest linden avenue in Europe, which is a popular promenade for people of all ages. Also, there is an old castle from the 9th century. Especially popular among travelers Uzhgorod is in spring when the Japanese cherry (sakura) blossoms, giving off a strong and beautiful scent.