Ukrainian people has always been known for their hospitality. Among the various Slavic cuisines, the Ukrainian cuisine is famous far beyond the borders of the country. The local cuisine includes the typical dishes: borsch, varenyky (dough pockets), halushky, pampushky, kovbasa which are common all over the country. Depending on the region, the recipes and ingredients of those dishes can differ. Geographical and cultural regions of Ukraine have also their own local traditional dishes (e.g. banosh, mamalyga and bograch in the Carpathians, kulish, kapusniak, pyrizhky, pechenia in central Ukraine, pumpkin porridge, ukha soup, okroshka in the south of the country etc.).

Under influences of various European cuisine traditions (such as German, Turkish, Polish, Hungarian and Russian, due to historical realities) Ukrainian food nowadays is quite diverse and rich. However, the culture of local kitchen grew basically on the ground of people’s activities and the features of the natural environment. Therefore, a special feature of the Ukrainian kitchen is the usage of a great variety of mainly local products, such as potatoes, meat, fruits, mushrooms, berries and herbs. The meat plays an important role in the Ukrainian kitchen. The most popular is the pork meat, but also beef and mutton is used in cooking as well as chicken, goose, duck, and rabbit’s meat is beloved among Ukrainian cookers. The typical meat dish is drygli (jellied meat). One of the most popular products among Ukrainians is pork fat called “salo”. It is traditionally used in the Ukrainian cuisine in different variants: raw, salted, cooked, smoked or fried. It is also eaten in various forms as an appetizer with garlic, onions, and cucumbers and often comes with the meal. Well, nowadays salo turned to be more as a stereotype towards Ukrainians, however, some hundred years ago it was indeed an integral part of Ukrainian cuisine.

The common thing for the Ukrainian kitchen is cooking with the fresh ingredients and preferably with fresh spices. Usually Ukrainian cooks, as well as the housewives, use such spices as mustard and horseradish for preparing traditional dishes.

Talking about drinks, Ukrainians prefer tea, coffee, mineral water or kvas. But also different kinds of fruit juices are popular. Certainly, you should not miss compote – fruit juices cooked from plums, cherries, apples or other fruits. Quite traditional for Ukraine are the self-squeezed fruit juices, made from the own fruit harvest.

Alcoholic drinks are very often served at meals and here horilka (Ukrainian vodka) plays a major role. It’s also popular to make horilka in a special way – with herbs or fruits – then this kind of alcoholic drink is called nalyvka or nastoyanka. Another tasty but quite strong drink is horilka made with the honey, which is called medovukha. Samogon (Ukrainian homemade vodka) is also a highly recommended, although, this drink nowadays is served much rare. In recent years, wines and beer became quite popular among Ukrainians. 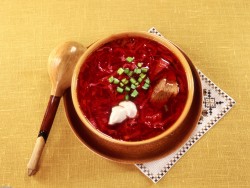 Borshch is a rich vegetable soup. This dish can be cooked in a variety of ways and with a wide range of ingredients. There are known about 30 different delicious recipes of this dish depending on the region of the country. However, the main ingredient which should never be missed in this tasty soup is the red beetroot. For cooking borshch, one use fresh vegetables (potato, cabbage, beet, tomato) with the addition of pounded lard with garlic and parsley. Such a combination gives a special taste and flavor to borshch. In north-west regions of Ukraine as well as in Carpathian the important ingredients of borshch additionally to fresh vegetables are dry mushrooms and beans. 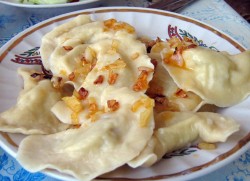 Varenyky (or Pierogi): Varenyky are somehow similar to ravioli. Usually, they have semi-circle shape. Varenyky are made by wrapping of unleavened dough around a savory (e.g. mashed potato, pickled cabbage, home cheese, mushrooms, meat ets.) or sweet (e.g. berries, poppy) fillings and cooked in boiling water. This dish is served with butter, cream or grilled beef, fried onion, depending on the filling. In old Ukrainian tradition, this was the dish that each housewife was cooking every Sunday.

This traditional Ukrainian dishes can be tasted in many restaurants which specialize in the Ukrainian national cuisine.

Have a good meal!