Ukraine, as a tourist destination, becomes more and more popular among wide auditory of tourist from Europe and not only. Within last years (especially, since 2004 when the Orange Revolution took place) the interest of European citizens towards Ukraine rose significantly. And this fact is quite explainable – there are a lot of attractions in Ukraine, which can’t be found anywhere else.

The most popular tourists’ destinations in Ukraine are Odessa city on the Black Sea side in the south of Ukraine, Kiev, the capital of the country in the central part of Ukraine, located on the Dnieper River, and Lviv as the tourism and festivals center in Western Ukraine! Besides, there are plenty of bigger and smaller Ukrainian towns with rich cultural and historical heritage, numerous monasteries and churches of different confessions. To the most impressive religious monuments in Ukraine belong wooden churches which are on the UNESCO heritage list. The territory of Ukraine is overflowing with fortresses and castles referring to different historical periods. Carpathian Mountains and Hutsul ethnic culture are the most popular attractions among Ukrainian and foreign travellers.

Here, in Ukraine at every corner one can meet traces of influences of many different cultures and nations. Traditions and religions of Eastern and Western worlds have being actively forming Ukrainian history for many centuries. Nowhere else as in Ukraine the Eastern and Western cultures has crossed their routes and created the unique and authentic culture of the country on the eastern edge of Europe!

With our trip we will show you the key highlights of Western Ukraine: the city of Lviv, which is recognized as the cultural capital of Ukraine but also famous by its coffee and chocolate; the elegant city of Chernivtsi, which represents its royal and imperial richness of Austria- Hungary times; castles of Bessarabia and Podolia, the picturesque landscapes of the Ukrainian Carpathians, bright ethnical groups of Boikos and Hutsuls… These are only a few of top Ukrainian attractions, which you must not miss when visiting Ukraine. With our Ukraine tours, you get the chance to dive into authentic Ukrainian culture and explore this wonderful country from inside.

Your journey begins in Vienna and heads towards Ukraine!  At the Ukrainian border, you meet REISEWELT UKRAINE highly qualified German speaking guide who will accompany you from / to the Ukrainian border throughout the whole period of your trip in Ukraine. In the evening you arrive in Uzhhorod – the capital city of Transcarpathian region. Although Uzhhorod is not a large city, nevertheless it has a lot to offer for the visitors. You will have orientation tour in Uzhhorod and then dinner and overnight in the hotel.

Breakfast in the hotel. Departure for your Carpathian adventure. This day offers you spectacular route through the Ukrainian Carpathians.

Our first visit will be to the town of Mukachevo, the second largest town in Transcarpathian region after Uzhhorod. Mukachevo castle served for a long time as an important protection point of Transcarpathian Ukraine against enemy raids. This most important attraction of Mukachevo is about three kilometers away from the downtown. The castle was built in the 14th century as the residence of the Hungarian Princes Korjatovyč. In recent years extensive restoration work has been conducted here. From the top of the castle opens a beautiful view over the picturesque lands. In bright days one can reach with his sight deep into the countryside over the city landscape. After the visit of castle Palanok, you will enjoy Mukachevo city tour.

Continuing the trip, you arrive to the buffalo farm in Steblivka village. This special farm is run by a German agronomist and enthusiasts Michel Jacobi. He has started and now successfully implements the unique ecological project aimed to preserve Carpathian buffalos and Hucul horses. Here you will have an excursion around the farm and, of course will try some snacks.

Going further, you visit the Geographical Center of Europe in the village Dilove near the town of Rakhiv, directly at the Ukrainian-Romanian border. Dilove was defined as the Geographical Center of Europe in 1887, when the Transcarpathian region belonged to royal and imperial monarchy of Austria-Hungary. The place is marked with 2 m high geodetic monument made of concrete, which has been preserved here from Austria-Hungary times. Here we make a short stop to take pictures and to visit souvenir market. Lunch you will enjoy in a Kolyba, where you can taste typical regional specialties.

You go further to Vorokhta. There you will visit the Mary Nativity church dated by 1615. This is one of the oldest wooden churches in Ukraine. The other attraction in Vorohta is the railway viaduct (built during Austria-Hungary period). 130 meters long, nowadays in Europe it is one of the largest viaducts built of stone.

In the evening you will arrive in Yaremche / Tatariv – a health resort, which was a favorite place for the vacation among wealthy people from Poland and Austria-Hungary.

Wonderful nature, well-developed tourism infrastructure, and of course the closeness to the ski resort of Bukovel makes Yaremche attractive for tourists all year long. Check-in at the hotel, delicious dinner with Ukrainian national specialties and overnight.

Today an extremely interesting and exciting trip is waiting for you. You visit one of the most beautiful corners of Ukrainian Carpathians – the alpine meadow, where you can enjoy wild nature, fresh air and rare species of flora and fauna.

There at the alpine meadow, after a nice hiking you will enjoy your lunch – hrybna yushka (mushroom soup), shashlyk (meat grilled on the campfire), uzvar (juice made of dried fruits and berries).

All those Carpathian typical specialties will be prepared for you by ethnic Hutsul who is recognized among locals as the best chef. After this tasty and exciting trip, you come back to Yaremche.

Delicious dinner with regional Carpathian specialties is waiting for you at the hotel. The highlight of the day will be the visit to the sauna.

After breakfast in the hotel, you go for the new adventure.

This day offers you a picturesque route through the Ukrainian Carpathians towards Bukovina – one of the most attractive historical regions of Ukraine.

On the way, you visit famous Easter Egg Museum in Kolomyia, the town which became unofficial capital of Hutsulshchyna ethnic region. Kolomyia Easter Egg Museum is unique with its exhibits as well as is the only one of this kind in the world.

The destination point for today is the city of Chernivtsi – one of the most beautiful western Ukrainian cities, which perfectly represents its royal and imperial heritage of Austria-Hungary times. In the capital city of Bukovina you have the lunch break which is followed by Chernivtsi city tour.

The city of Chernivtsi (Russian - Chernovtsy) remained as important trading center on the river Pruth during all periods of its history. Chernivtsi grew and developed firstly in Kyiv Rus then in frames of Principality of Moldova, and reached of its’ flourishing times during Austrian period (1775-1918) as the capital of the Austrian duchy Bukovina.

Chernivtsi is known as the city where people and books live. This status is proven by such world known names as Paul Celan, Rosa Ausländer or Gregor von Rezzori, who were born and lived in Chernivtsi. Thanks to those geniuses of world literature, Chernivtsi became known in German-speaking countries as the multicultural paradise of Eastern Europe.

Here, in the capital city of Bukovina one can find many similarities to Western Europe as well as lots of differences and particularities, which make Chernivtsi the unique Ukrainian city.

After the great city tour, you have a nice dinner and overnighting in the hotel.

You start this day of your trip with breakfast in the hotel and further departure to explore Ukraine.  This day offers you fresh impressions which arise again and again because of the rich historical and cultural heritage of the Bukovina region.

You drive through vast plains of Podolian plateaus. The route takes you to the second largest river of Ukraine – Dniester. The first visit is planned to the town of Khotyn. In Khotyn there is a magnificent castle on the banks of the Dniester, which originally guarded the Ottoman-Polish border.  Before the First World War, Knotyn belonged to former Russian Bessarabia Government. In between of WWI and WWII, Khotyn was on the edge of three borders – Romania, Soviet Union and Poland.

From Khotyn the route leads you to the breathtaking castle in Kamianets Podilskyi. This city was repeatedly concurred with Tatar and Turkish raids, therefore peculiar Fortification was constructed here to protect the city from destruction.

After the great tour to the most beautiful fortresses in Ukraine, you will have a nice dinner and overnighting in the hotel in Kamianets Podilskyi.

After breakfast in the hotel, you go further towards Lviv. On the way, you visit a castle in Olesko. Here was born Johann III Sobieski, who in 1683 defeated Turkish siege of Vienna. Right after excursion around the castle, you will have lunch at the medieval style restaurant.

After lunch, you go further to Lemberg the former capital of the Austrian crown land known as the Kingdom of Galicia and Lodomeria which is now the city of Lviv, recognized as the cultural capital of Ukraine.  Arrival to Lviv, check in at the hotel and dinner.

Right after breakfast starts the guiding tour around Lviv. Lviv (Russian - Lvov), formed by various eras and rulers, is nowadays the cultural metropolis and largest city in Western Ukraine.

During the detailed city tour, you will explore historic downtown of Lviv with many UNESCO protected monuments such as the town hall, Jewish quarter, Arsenal Museum, Mary Dormition Church, Boim Chapel, the house of the seasons, Armenian church, and many other Lviv attractions.

For a long time, Lviv played the role of unofficial capital of Ukraine, which has made a significant contribution into Ukrainian national revival. The role of Lviv as the cultural capital of Ukraine is beyond doubt. In Ukraine and abroad Lviv is also known with its beer and coffee culture.

The afternoon is at your leisure disposal. Dinner and overnighting in the hotel.

In the morning, after early breakfast, you ride 70-km to the Ukrainian-Polish border, where your REISEWELT UKRAINE tour guide says “Good bye” to you.

Price per person based on double occupancy. Price on request

Number of participants: at least 4 people.

Sightseeing in Uzhhorod, small city tour & visit to the Castle Palanok in Mukachevo, visit to the rescue center for Carpathian buffalos including lunch, hiking in Vorokhta, visit to the Easter Egg Museum in Kolomyia, city tour in Chernivtsi including Metropolitan residence, guiding in Khotyn and Kamianets Podilskyi, visiting the castle in Olesko, Lviv city Center tour (UNESCO world heritage Site) 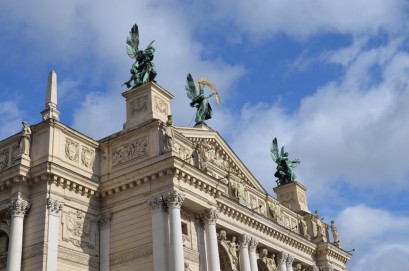