You come by flight to Odessa. Meeting and welcome by the German-speaking guide.

Odessa, the pearl of the Black Sea is the starting point of your trip in Ukraine. It is a cosmopolitan port city, which was founded as the harbor city in the late 18th century purposefully for grain export. Situated on the northern edge of the Black Sea, Odessa played the main role in the merchant trading between former Russian empire and Europe.

You will explore a chessboard planning of the city center, enjoy peaceful shades of the catalpa and acacia trees which hide you from the blazing heat during the summer time in Odessa.

The spices to your impression about the city will be added by its architectural jewels such as the world famous Odessa Opera House, the Potemkin Stairs or a conglomeration of various buildings on the magnificent De Ribas Street. Additionally, you have an opportunity to enjoy a good South Ukrainian wine, as well as the wide range of Ukrainian, Russian, Moldovan and Jewish dishes, while breathing healthy mild and salty sea breeze.

In the morning you have an optional possibility to join the trip to Odessa catacombs. With a total length of 3000 km, these catacombs excel the famous catacombs of Rome (300 km) and Paris (500). Essentially, the catacombs appeared as the result of outputting of the limestone, which was used as the building material. The quarries emerged in the thirties of the 19th century. Stone blocks were used for the construction of the city buildings in Odessa.

The other option instead of visiting the Odessa catacombs is having a free morning in Odessa.

In the evening, the musical highlights of this trip – the performance at Odessa Opera House is waiting for you. It is a special theater with no doubts. The building is full of particular aura. It seems that a myth is soaring inside the Opera of Odessa. With its architectural splendor of Vienna baroque, Odessa Opera House is one of the most beautiful opera buildings in the world. It was built by the same architects (Fellner & Helmer Company) who built the Opera House in Zurich.

On the early morning, you have transfer to the Odessa airport and flight to Kiev.

This day is fully dedicated to the city of Kiev. Here you will visit the Monastery of Kyiv Pechersk Lavra, which is considered as the most important Orthodox sanctuary in Ukraine. The Golden Gate and St. Sophia Cathedral – the oldest church in Kiev, are also on the list of places you will visit in the capital of Ukraine. These attractions of the city are nowadays included to the UNESCO World Heritage List. You will also attend the Independence Square with the crossways laying Khreshchatyk Street. In 2004 the peaceful Orange Revolution took place here and in winter 2013-14 the Revolution of dignity, known also as Euromaidan on Kyiv Maidan stirred up the world.

After excursion around Kiev, the further program foresees free afternoon for individual discoveries. Now you can take your time for individual adventure, exploring the Kiev subway - one of the deepest and amazingly cheap subways in Europe with unique stations! After the early dinner, you are going to enjoy the performance at the Kiev Opera House, which is considered to be the oldest music theater of Ukraine.

The morning of this day offers you an optional opportunity for a most interesting adventure – a real time travel into the ancient times of the Kievan rulers. The Kievan Rus Park is a unique and exclusive restoration and reconstruction of old Kiev of the V-XIII centuries. Based on the scientific knowledge and documents about Kiev Rus times, the historical center which is known as Detinets or Vladimirs city has been entirely renewed 1:1. It is the only place where you can see how the capital of Ukraine looked thousand years ago - at the beginning of its formation and during flowering period.

During the tour, you will explore the architecture of medieval urban development, as well as historical costumes and armor of V-XIII century.

Afterwards, you are invited to taste the dishes of Ukrainian medieval cuisine cooked specially for you at the campfire. The afternoon and evening are planned as your leisure time.

In the early morning, you have transfer to the airport of Kiev and flight to Lviv. In Lviv the local tour guide will meet you. This day foresees the detailed acquaintance with the city of Lviv. Lviv (Russian Lvov) is the largest city in the western Ukraine which is embossed by the spirit of various epochs and its cultural particularities.

While a detailed city tour you will see the UNESCO city center of Lviv. You will also visit the Solomiya Krushelnytska Museum, which commemorates the famous Ukrainian opera singer (she performed in Puccini’s "Madame Butterfly").

In the afternoon the visit to Shevchenko Hai (Lviv open-air museum with wooden buildings from the entire western part of Ukraine) and the Lychakiv cemetery is planned.

Later in the evening, you attend the performance at Lviv Opera House – one of the main attractions of Lviv.

This architectural masterpiece in the Neo-Renaissance style was in 1900 by the Polish architect - Zygmund Gorgolewski, who also had projected numerous buildings in Germany and Poland.

In the morning, as an optional opportunity we offer you an excursion to the neighborhood of Lviv. This trip ensures you a pleasant change of a big city to a cozy small town atmosphere, which perfectly represent the typical Ukrainian province. During this small outing, you will visit the town of Zhovkva (Polish - Żółkiew), the "ideal city" of XVI century. Embedded in a beautiful landscape, the city of Zhovkva is a masterpiece of the Renaissance period. In Zhovkva you can also attend a beautiful wooden church dated by early XVIII century with old wonderful iconostasis of the local icon painting school. The church is currently functional and, moreover, nominated for UNESCO World Heritage Site. After the excursion to Zhovkva you come back to Lviv.

Otherwise, you can use the free time for shopping, cafés and wandering around amazing streets of Lviv.

The morning is at your leisure disposal.

Lunch. Transfer to the airport. Flight from Lviv to Vienna or another city according to your destination point.

Price per person based on double occupancy:  on request

Number of participants: at least 16 people. 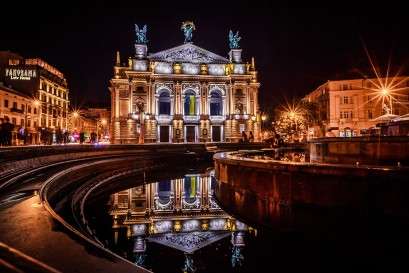 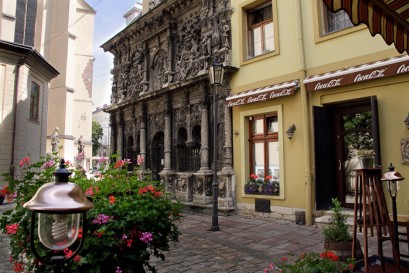