In the south of Ukraine, there is the “Ukrainian Mediterranean”. Odessa port city is a real pearl on the coast of the Black Sea. This Ukrainian city is an extremely invigorating mix of ethnicities and their historical heritage: the multinational and polireligious culture of Odessa is highlighted with the brilliance of tsars’ times, Oriental motifs, and glorious Black Sea Fleet. Besides all those visual attractions and atmospheric views, the feeling of bliss is brought by spicy, fresh sea air.

Those who would like to understand peculiarities of people living in Odessa, their way of thinking, their culture of communication, their humor and relationships within the community must live in this city for a while. Geographically and politically, Odessa belongs to Ukraine, but talking about the mentality of its inhabitants, that does not seem to fit the frames of pure Ukrainian culture. In Odessa, life runs in a special, often extraordinary and almost bizarre way.

The chessboard design of the city center with boulevards, avenues, and mysterious backyards seduces to the serene wanderings. The gentle sun, the mild climate, and the salty air make people taking the life easier here. 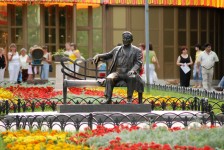 The history of the city refers to the ancient times, but the greatest changes came only in the 18th century. Then in 1794, Russian princess Catherine the Great, invested into Odessa to build out this city, as it was a strategical point for the Russian empire accessing the Black Sea and extending the borders of the Empire.

On the invitation of Catherine the Great, Armand de Richelieu, French nobleman became the governor of Odesa in 1805. At this time the flourishing of the city starts.

Intellectuals and talents from all over the Europe flocked together to create the brand of the city. Italians designed the palaces, Greeks operated shipping industry, Germans developed agricultural sector. As the trade city, Odessa became the most important Jewish center in the Russian Empire.

Out of this Jewish trade culture takes its roots the famous Odessa humor: neat, ironic, and direct.

Later on that time, the myth of Odessa appeared which actually combined three different myths: Russian, Jewish and later on – Ukrainian. A great research on this topic was made by American scientist Patricia Herlihy in her book “Odessa: A History of the city 1794–1914”.

During the XIX century, Odessa used to be the biggest grain exporter in the world, selling Ukrainian grains to Great Britain, Italy, Germany, Austria, Turkey, and Balkans. Before the World War I started, Odessa was the fourth largest city in the Russian Empire after St. Petersburg, Moscow, and Warsaw and had 660,000 inhabitants.

After the WWI, revolution, and the civil war, the development of the city significantly decreased, the "golden century" stayed behind and the times of decay came instead.

Today Odessa has about 1 million inhabitants. In the south, the sea port of Odessa borders with the port of Chornomorsk (until 16th February 2016, named Illichivsk's) – the largest sea trading center in Ukraine. The symbol and the best-known monument of Odessa is the Potemkin Stairs which lead from the old city center to the harbor. This majestic monument counts 192 stairs. From the down side one can see precisely the stairs which are leading up to the monument of Duc de Richelieu and from the top of the stairs only tiers can be recognized. The legendary staircase is 12.5 meters wide at the top, and at the bottom the length of the stairs is 22 meters. Named after General Potemkin, the lover and friend of Catherine II., the staircase is a unique entrance from the harbor to the historical center of Odessa.

Another attraction of the Ukrainian Black Sea port of Odessa is the Opera House. For its construction an international competition was announced. The Vienna architecture studio Fellner & Helmer won the right for implementations of building works. These were considered to be the best architects who have built nearly 50 theaters between Hamburg and Sofia. In 1887 the great Opera Theater with more than 1500 seats was opened in Odessa. By the opening, particularly innovative in Odessa’s Opera was the lighting. And now, after years of restoration, the house lights up again as at the first day – cheering both, the ensemble and the visitors. The baroque brilliance and greatness of the foyers and the concert hall can be admired during performances or excursions. Most beautiful in Odessa are the months before and after the high season when the tourists rush is over. If you have enough time during your trip, do not miss visiting the Odessa backyards.

Those rambling constrictions with backhouses extending back courtyards are an architectural feature of Odessa. All of those courtyards have their own special charm. One can hardly imagine Odessa’ backyards without wine or laundry hanging out to dry between the walls of inside houses. These sometimes are followed by argues between neighbors or the nightly meowing of wandering cats.