Teilnahmequote an der Befragung: %
WEEKENDS IN KIEV - THE CAPITAL OF UKRAINE
3 or 4 days of the city trip

Arrival to Kiev. Transfer from the airport to the hotel. Check in.

This day is devoted to Kiev, which has not only been actively involved in European history for more than 1000 years and has a considerable number of historical sights, but has also developed rapidly as a vibrant European metropolis with over 3 million inhabitants on both sides of the Dnieper River.

Among TOP places in Kiev - Lavra cave monastery, which is the most important orthodox place of pilgrimage in Ukraine, the Golden Gate and the oldest church of Kiev -the St. Sophia cathedral. These sights belong nowadays to the UNESCO World Heritage.

St. Andreas slope, with the baroque church on the top and many street cafes as well as art galleries, is one of the most beautiful streets you can find in Kiev. But the most famous in Kiev is, of course, Khreshchatyk Street and the Independence Square where the peaceful Orange Revolution in 2004 and Revolution of Dignity in 2013-2014 took places. All of this you will see during the guided tour through Kiev.

In the afternoon after Kiev city tour, there is free time for individual discoveries. You can try a little adventure in the Kiev subway - one of the deepest and surprisingly cheap subways in the whole Europe!

There are countless possibilities to make your stay in Kiev as interesting and varied as possible. Optionally we offer the following excursions:

Visit of one of Europe's largest open-air museums. Pyrohovo - museum of folk architecture and everyday life. The territory, which is about 150 hectares, represents a small copy of Ukraine (here architectural and cultural particularities of all regions of the country can be seen), so you can visit the whole country in 2 hours by feet.

This is a one-day expedition to the lost place where since last 30 years no one lives anymore. The visit to the 30-kilometer barrier zone opens you the gate to the biggest catastrophe in the Eastern Europe of the second part of XX century. You will see the buildings in the deserted villages and the ghost town of Pripyat, and will find out the true story of what happened in the former Soviet republic. Overnight stay possible!

After the solid restoration, the castle became again the medieval fortification complex where the authentic interior architecture of the XVII-XIX century was artfully reconstructed.

Here is also the only museum of Ukrainian icons. Its collection is the largest in a whole Eastern Europe!

BOAT TRIP THROUGH THE DNIEPER RIVER

It is a good opportunity to discover the Ukrainian capital and its surroundings in a peaceful atmosphere, while enjoying the breathtaking views of Kiev which can be seen only from the waves of the Dnieper River.  You can also order a delicious lunch or dinner on the board. And all this beauty with the music back up!

The "Kiev Rus" Park is in the history of mankind a unique and exclusive reconstruction of the ancient city of Kiev of V-XIII centuries. It is the only place where you can see how the capital of Ukraine looked a thousand years ago - at the beginning of its emergence and during the flowering period.

The 137-acre territory is located in the northern part of Kiev, on the banks of the river Dnipro. Until 22 February 2014 it was the luxurious residence of the former Ukrainian President Yanukovich. Later the whole area was declared by the opposition to the "National Museum of Corruption". We offer you a unique opportunity to visit this luxury villa and the surrounding territory with lots of splendid sights.

Saying “Goodbye” to the Ukrainian capital. Transfer to the airport.

Price per person in double room: on request

Period:  all year round 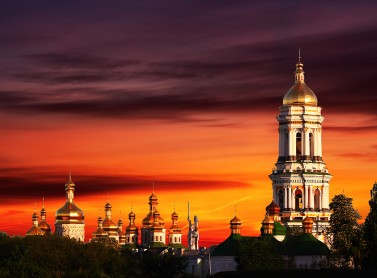 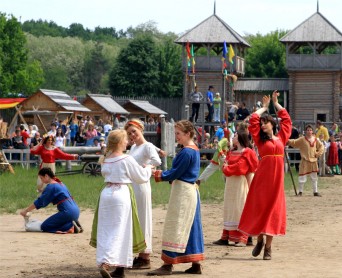